A Series of Three Short Presentations

This month&rsquos ETGS meeting will follow a slightly different format than is usual. Instead of having one speaker give a 50-minute-long presentation, we will be featuring three &ldquomini&rdquo presentations (each approximately 15 minutes long) by students from the Department of Earth and Planetary Sciences (EPS) at the University of Tennessee - Knoxville. Each year EPS offers a course on &ldquoProfessional Presentations&rdquo (Geology 596) to provide a formal opportunity for students to develop their oral communication skills. This one-credit course involves writing an abstract, and preparing, practicing, and delivering a professional presentation on any geological topic of interest.

The students present their talks at a departmental seminar, and they are ranked by the seminar attendees and a five-person committee consisting faculty and students. This year ETGS has partnered with EPS to further broaden this valuable experience by offering awards to the top three student presenters and hosting them at our May meeting where they will give their talks to a professional audience. We hope you can join us to support this new generation of geologists and see their award-winning presentations. Abstracts of their presentations are provided below. 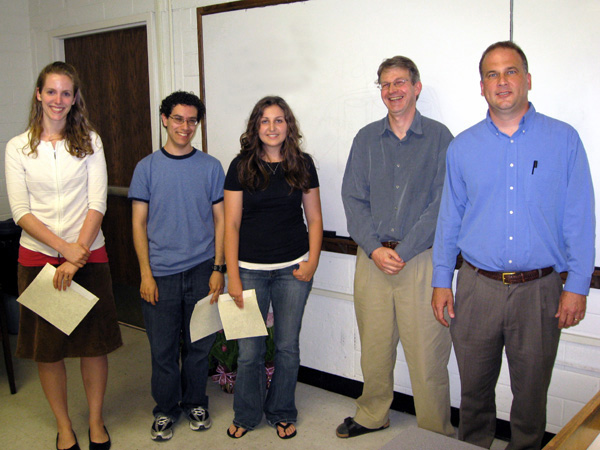 
The Mars Express OMEGA and Mars Reconnaissance Orbiter CRISM experiments have discovered and mapped mineralogically diverse phyllosilicate deposits on Mars. These instruments operate in the visible and near-infrared wavelength portion of the spectrum, and are sensitive to interlayer water and cation-hydroxyl bonds within the phyllosilicate structure. Unlike OMEGA and CRISM, the Mars Odyssey THEMIS experiment has acquired images with nearly global coverage. THEMIS is a multispectral imager that operates in the thermal infrared portion of the spectrum, sensitive to Si-O bonds and cation-hydroxyl bonds in the phyllosilicate structure. It would be advantageous to use THEMIS (due to its superior coverage) to extend mapping of phyllosilicate-rich regions into areas where CRISM and OMEGA have not yet covered. With this as our impetus, we have empirically derived a THEMIS Phyllosilicate Index (TPI) that is sensitive to the phyllosilicate-rich regions that CRISM and OMEGA have mapped. The TPI has been used in Terra Sirenum, revealing new outcrops of potential phyllosilicate-bearing material. In this region, the phyllosilicates are found to commonly occur in crater floors, suggesting these local lows act as areas for phyllosilicate accumulation. TPI-detected deposits appearing to emanate from Terra Fossae may imply hydrothermal alteration and fluid flow along this fracture. The TPI identification of new phyllosilicate deposits demonstrates the potential for a THEMIS-based global TPI map, which would help to further constrain the environments and processes of phyllosilicate formation on Mars.

The identification and study of small simple meteorite impact craters (<2km) is often problematic because these structures lack the macroscopic, distinctive features associated with impact craters. Studying simple craters, however, plays an important role in our understanding of the cratering process, particularly low shock deformation.

This mineralogic and petrographic study combines two principles of cratering modeling and experimentation: 1) During impact cratering, the deformation pressure decreases with depth from the point of compression and 2) Material from greatest pre-impact depth gets deposited closest to the crater rim after excavation. Thus, material located closest to the crater rim would have experiences lower deformation pressure than material found farther away (which was at a lower pre-impact depth). The goal of this study is to use shock features to trace this pressure gradient from the crater rim outward away from the crater.

This study highlights one of the continual struggles in understanding the impact crater process. I was unable to trace the pressure gradient. Experimental and theoretical impact barometry calculations are based on deformation in quartz (&ldquoPlanar Deformation Features&rdquo or &ldquoPDF&rsquos&rdquo) above 12 GPa. Many samples did not show any PDF&rsquos. However, textures and microraman spectral data of feldspars suggest these rocks were affected by the impact, and as predicted the samples from furthest away showed the most deformation. In order to fully understand impact cratering at all levels, experimental and theoretical work needs to be done on additional minerals other than quartz. Such work would allow us to apply impact cratering to environments which either lack quartz or experiences lower shock pressures than required to deform quartz.

Detailed geologic mapping is being conducted in the Mansfield and Farrar 7.5-minute quadrangles in the central Georgia Inner Piedmont (IP) to trace the possible extension of the Brindle Creek fault (BCf) and Cat Square terrane (CSt). A large fault has been identified in aeromagnetic data as a prominent lineament that truncates a suite of curved magnetic anomalies. This fault may be the suture between the western IP Tugaloo terrane (Tt) from the CSt and is interpreted as a large-scale SW-directed type-F thrust sheet. The Tt in North Carolina and northeast Georgia consists of the Neoproterozoic to early Paleozoic(?) Tallulah Falls Fm. and the Mid-Ordovician Poor Mountain Fm., both intruded by Ordovician-Silurian granitoids. CSt rocks in North Caroliona consist of Silurian-Devonian sillimanite-schist, metagraywacke, and Devonian-Mississippian anatectic granitoids. Peri-Gondwanan (500-600 Ma), Laurentian (1500-1000 Ma), and 430 Ma zircons have been identified in the CSt in North Carolina and South Carolina. One detrital zircon sample from the study area contains Laurentian and peri-Gondwanan (630 Ma) zircons. In central Georgia the BCf (?) exhibits a dextral shear sense, much like that of the BCf located in North Carolina and South Carolina. The dip of the BCf transitions from a shallowly dipping fault in North Carolina and South Carolina to a steeply dipping fault in the central Georgia IP. This transition could be attributed to the fault proximity to the Central Piedmont suture, which is the bounding fault to the east of the IP. The curved anomalies truncated against the fault may track the trends of dominant S2 foliation and L2 mineral stretching lineation and possibly correlate with crustal scale transport in the IP.