Note: ETGS members will receive an email with info for logging into the meeting.


Chaos Terrains on Pluto, Europa, and Mars: Insights to Crustal Lithology and Structure 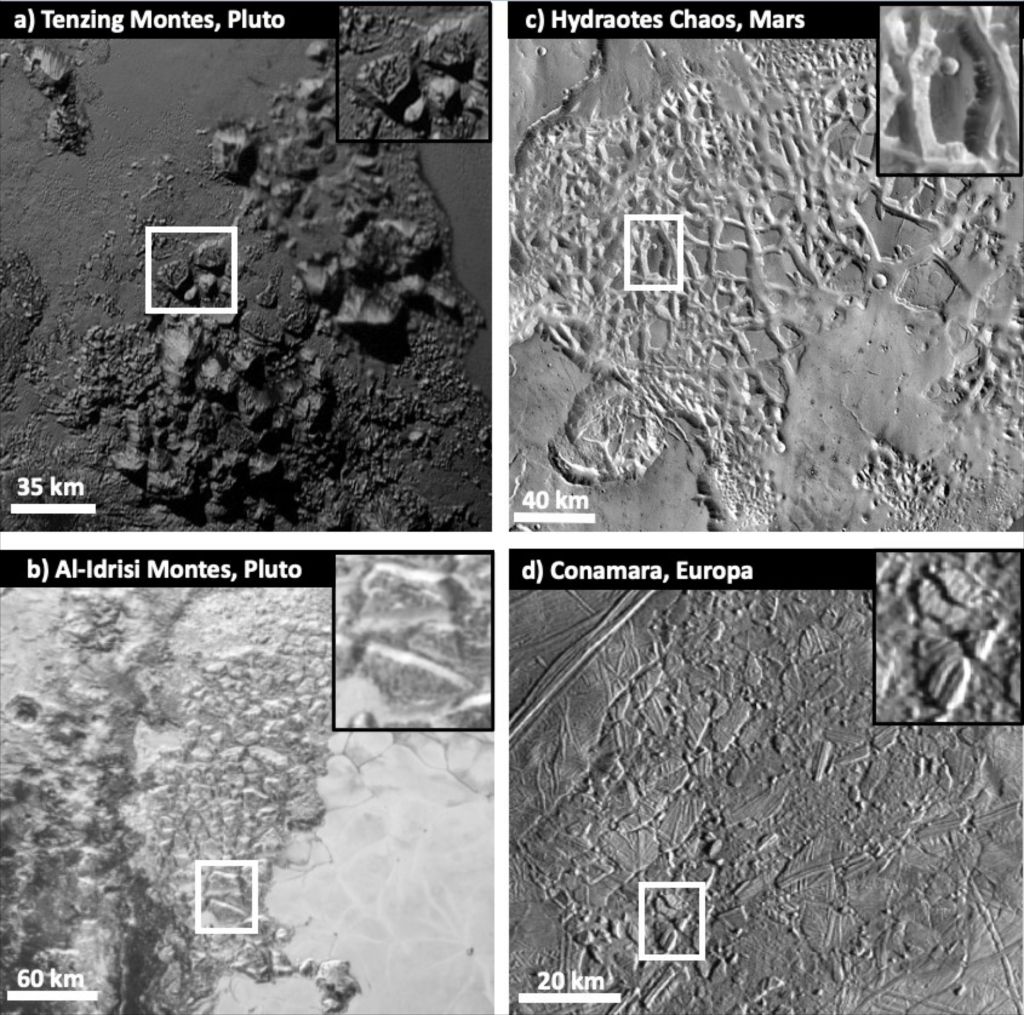 Chaos terrains are formed by disruption of preexisting surfaces into irregularly shaped blocks with a "chaotic" appearance. These distinctive areas of broken terrains, most analogous to terrestrial floating icebergs, are most notably found on Jupiter's moon Europa, Pluto, and Mars. Several models for chaos formation have been proposed, but the formation and evolution of this enigmatic terrain type has not yet been fully constrained. Fracturing, induced through a variety of processes, contributes to initial surface disruption and chaos block formation. The subsequent evolution of these blocks after fracturing forms can follow several paths (e.g., destabilize and free from the surface, float in solid or liquid with sufficient density contrast, rotate, translate, or remain in place), contributing to some of the morphological differences in chaos terrains observed across each body. We provide extensive mapping of individual blocks that make up chaos landscapes and present a morphological comparison of blocks in chaos terrain regions on Pluto, Europa, and Mars. Knowledge of physical characteristics of chaos terrains will help to constrain chaos formation models and the geologic evolution of each body. We find a positive linear relationship between the size and height of chaos blocks on Pluto and Mars, whereas blocks on Europa exhibit a "flat" size-height trend. Further, we demonstrate that measured characteristics of chaos terrain blocks on Pluto, Europa, and Mars can be used to infer information about crustal lithology and surface layer thickness; block heights on Pluto are used to estimate the block root depths if they were floating icebergs; block heights on Europa are used to infer the total thickness of the icy layer from which the blocks formed; and finally, block heights on Mars are compared to potential layer thicknesses of surrounding near-surface material.

Helle is currently pursuing a PhD at the University of Tennessee, Knoxville (2019-present). Born and raised in Norway, she moved to Colorado in 2013 to pursue her dream of becoming a geologist and received dual B.A. degrees in Geology and Geography from the University of Colorado at Boulder in 2018. After graduation, she worked as a scientist at the Southwest Research Institute, supporting research on secondary impact craters on the Moon and Mercury, chaos terrains on Pluto, Europa, and Mars, and fracture systems on Charon. During her time living in the Rocky Mountains before moving to the Smoky Mountains, she became drawn to rock climbing and mountaineering as another outlet to enjoy rocks, geological wonders, and outdoor adventures with friends and her dog, Nicki.

The recent tenuous discovery of phosphine gas in Venus' atmosphere and its speculative biogenic origin have rekindled broad scientific interest in our sister planet. However, this renewed curiosity has also underscored our lack of understanding of Venus' surface and interior dynamics, due in great part to the major obstacles to observing its surface imposed by its 470 deg C, 90 bars surface conditions and its thick, opaque atmosphere. Chief among unconstrained surface data are primary rock and chemical weathering product mineralogies that were not characterized in the limited in-situ geochemical analyses collected by Soviet landers in the 1980s. Yet, given Venus' extreme surface temperature and caustic, SO2-bearing CO2 atmosphere, its basaltic surface rocks are likely extensively altered. Here, new data are presented from a series of gas-solid reaction experiments, in which samples of two basalt compositions were reacted in an SO2-bearing CO2 atmosphere, at relevant Venus temperatures, pressure, and fO2. Results demonstrate that anhydrite and thenardite are the prevalent alteration products on tholeiitic and alkaline basalt samples, respectively, and Fe-oxide phases are minor. Moreover, alteration products may cover basaltic samples within a few weeks to months. Such rates indicate that some unweathered volcanic features observed on Venus, as determined from emissivity intensity contrasts, may have been emplaced very recently in its geologic past.

Mr. Reid is an M.Sc. Geology candidate at the University of Tennessee, Knoxville and will graduate in August 2021. He received his B.S. in Geology in 2019 from the University of West Georgia. His current work, which experimentally modeled basalt weathering via gas-solid reactions on the surface of Venus and constrained the ages of the planet's volcanic features, was presented at the Lunar and Planetary Science Conference in March. Prior research, which was presented at National and Southeast Regional GSA conferences, focused on tectonic and petrologic problems in the Southern Appalachians and in the Brevard Zone in western Georgia. He holds a Fundamentals of Geology certificate (GIT) from the National Association of State Boards of Geology and has broad interests in fields such as economic geology, geochemistry, geologic mapping, engineering geology, and hydrogeology. He and his wife of 27 years reside in Atlanta, Georgia. They have three adult children and one grandchild.

Greetings! We hope you will join us for the next ETGS virtual meeting, and that you, your family, and your colleagues are staying healthy and well.

We will create an attendance list based on the participant names we can see during the meeting. This is helpful for those who need to document participation to support Professional Geologist registrations. It is not always possible to tell who is participating, especially for those joining by phone, so please email your name to etgs@live.com to be listed on the attendance sheet. Let us know exactly how your name should appear on the list.

Thank you for your patience and understanding as we continue adapting to this virtual format. As always, we welcome and appreciate your feedback and suggestions for improvement.